Who’s to say who’s more talented; the six-time NHL all-star and Stanley cup champion or the part-time smut blogger? There’s arguments for both sides but let’s not get buried in the details here.

I got a good story to tell— one that I’ll tell my Grandchildren and their children’s children.

My old roommate/good friend had his high school buddies in town from Michigan and we went to downtown Dallas for some drinks and ended up at a popular club called Bottled Blonde. The place is like any other club; loud music and $19 Red Bull vodkas surrounded by hundreds of beautiful people taking Snapchat videos of themselves to a Pitbull s ong. It is notorious for hiring elite DJs and celebrities and pro-athletes are often spotted there letting loose from time-to-time.

It was a hellish scene for me, but I soldiered on for the good of the crew.

We walked outside the place around 2am and lingered in the front looking for Ubers but spotted some Lime Scooters and unanimously decided to go terrorize the city on two wheels before calling it a night. Scooter gang.

As we began scanning the bar codes, I noticed my buddy Ryan started to get excited about something, “woah is that…. yeah it is! TYLER! TYLER! Hey man! What’s up Tyler?”

We are all looked now. The handsome son of a bitch looked at Ryan like he had two heads. Sure enough, it was legendary Tyler Seguin of the Dallas Stars— former Boston Bruin. With panic in his eyes, he gave us a head nod but was very clearly trying to stay incognito and sneak off with the beautiful women that hung on him.

But a couple of liquored up Bruins fans weren’t going to allow him to get off that easy. We quickly became his worst nightmare.

“I loved you on Spittin Chicklets dude! Come back to Boston!” I was starting to make a scene as everyone outside was now looking.

“We’re Eskimo brothers dude!” I slurred at him and certainly within earshot of the ladies next to him.

(Quick backstory—I had met a couple of girls at a bar inside the American Airlines center for a Stars game back in 2014 who claimed to have slept with Tyler. I hit it off with one and got a quick kiss in before she left. But to me, this earned me the title of Eskimo Brothers with Tyler)

He glared at my sorry ass on the scooter and stormed off down the sidewalk away from us— his hair blew in the breeze majestically. Those ladies certainly weren’t happy either.

We scooted after him and harassed him one more time before disappearing into the streets of Dallas, “Come back to Boston, we miss you!”

It was a night to remember. I wonder if the millionaire NHL star still thinks about the night a drunken scooter mob of Boston guys gave him career advice outside of a Dallas nightclub and the fellow Eskimo Brother who inquired about a former, mutual lover in front of girls he was trying to take home.

I know I think about it everyday. Do I feel bad about it? Absolutely I do. But how many people can say they owned real estate in the mind of a pro-athlete just before he probably has sex?

Now that a couple years have passed, I also wonder if that girl thinks about her former lovers often— Does she reminisce over my whiskey breathed kiss as fondly as her sleepover with Tyler? 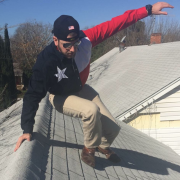 Watch Washington Capitals’ Tom Wilson Break Another Player In Half On The Ice!

Mr. Manners: Don’t Text Me! The Only Four Acceptable Texts