Growing up, every basketball player dreams of breaking records. They want to accomplish something that no one has ever been able to do.


University of Iowa Guard Jordan Bohannan was heading that way. Bohannon was on the path of breaking the Iowa record for most consecutive free throws in a row without missing. He had tied the record of 34 and could have easily made it 35 or higher. But… he had something else planned.

Here is the free throw Jordan Bohannon missed on purpose that would have broken Chris Street's record. And then a minute later, back to the line, you see his homage to Street. He made them both. pic.twitter.com/pv7Q0HOQdm

Bohannon purposely missed what would have been a record breaking free throw to honor record holder Chris Street.

Chris Street had made 34 free throws in a row in his junior year at Iowa before a car accident did not let him live to attempt his 35th.

"That's not my record to have. That record deserves to stay in his name."

“That’ not my record to have. That record deserves to stay in his name,” Bohannon told reporters after the game.


Bohannon has had a close relationship with the Street family, and he felt that this was bigger than the game of basketball. 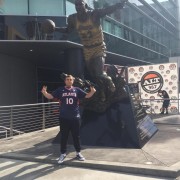 The Consistency of Kobe Bryant’s Career

The Consistency of Kobe Bryant’s Career

Louisville Basketball is Deader than Dead

Rejoice! College Basketball is Back!