They say that time heals all wounds, but this isn’t the case in regards to WWE star Lars Sullivan. Out of action since June of 2019, Sullivan was expected to return around WrestleMania 36 or shortly after WWE’s biggest yearly extravaganza. Unfortunately, a recent fan discovery may stall the career of a once bright prospect again.

Recently, Ringside News reported a fan discovery of Lars Sullivan in multiple homosexual pornographic film from many years back under the name of Mitch Bennett. This latest scandal in relation to Mr. Sullivan, might be the final nail in the coffin of his once prosperous career.

After a strong run in NXT, Sullivan made his main roster debut on Raw the night after WrestleMania 35 when he attacked Kurt Angle, who had just lost his farewell match to Baron Corbin one night earlier. There had been previous talks of Sullivan even facing John Cena at a highlighted match at WrestleMania 35. This never came to fruition as Sullivan had his first major issues in the WWE prior to his planned debut in January 2019. With reported anxiety attacks that stalled his initial planned debut on the main roster, WWE scrapped plans involving him and accommodated Sullivan in regards to his anxiety issues.

Through the 4 months after his stalled debut in January of 2019 to April 2019, there was very little mention of Sullivan by World Wrestling Entertainment. Little was known about the treatment for Sullivan’s apparent anxiety issues and fans were surprised by his debut in April of 2019 after WrestleMania 35. While he spent the next several months in squash matches, it was evident that Sullivan was in line for a nice push in the near future.

Shortly after making his main roster debut, some misogynistic, racist and anti-gay posts made by Sullivan years ago on a bodybuilding website surfaced on Reddit and became another bump in the road of this once rising prospect. As a result of his previous comments, WWE fined Sullivan $100,000 and required him to participate in sensitivity training. While injuries are never anything that we wish to see happen to performers, it was a good time for Sullivan to step away from the Limelight and let people forget about this unfortunate situation. While not being seen on television weekly can be the kiss of death for most performers, it was an opportunity to let Sullivan rest, recover, and forget the backlash from his old comments.

Is This The End Of Lars Sullivan’s WWE Career?

With the fan discovery of his homosexual pornographic films, the time may have come for Sullivan to end his career in World Wrestling Entertainment. After recent comments from various fans and the online troll community, Sullivan decided to delete his Twitter and this situation has not been addressed whatsoever by Sullivan or World Wrestling Entertainment. I have seen the back and forth debate from wrestling fans, wrestlers, and writers on the situation and if Sullivan’s career is salvageable.

Can His Once Bright Career Be Repaired?

So where does Sullivan go from here? Can this imposing and talented performer survive this latest incident? If done correctly, both Sullivan and WWE can take these negative situations from 2019 and the roller coaster ride he has been on and turn it into a positive that will repair his career and quite possibly make it brighter than ever. How do you do this? It’s actually a quite simple fix and can only be fixed properly this way. I offer free advice to WWE and Mr.Sullivan on this and if this is done you can turn the negatives of 2019 into a positive 2020 upon his injury return.

First thing needed to be done by WWE, stop with ignoring the situation! I spoke in depth on a recent episode of my podcast Wrestling With Reality about how this can be fixed. Every online troll, social justice Warrior, and WWE hater already knows about the situation. If you ignore it and fail to address the situation, you look like a dope. With proof from his body building posts from years ago and the video of him performing homosexual pornography, there is no denying this situation. WWE and Sullivan need to own the past and his actions.

Embrace any mistakes that were made and offer sincere remorse for what you did. Don’t do this in a canned written press release. Discuss it on WWE backstage, a fledgling show on Fox Sports One that can actually use a boost of ratings that can be attained with a Sullivan interview. The most important thing in this interview is it needs to be genuine and sincere. Would WWE allow this to happen? I think they actually may allow this on that show but the key thing is to be real and sincere. If it’s phony and pre-written you will kill any opportunity to fix the situation. Everybody loves a comeback and the underdog story. This could be his opportunity at a comeback and letting people see a different side of him.

Finally, when he is ready to return from injury bring him back as a face. Embrace a new persona and have him return as a monster that is here to take on the evil heel factions or hated heel characters. A couple of examples that comes to my mind is Sullivan coming back to fight against Seth Rollins new heel faction or potentially against the evil Fiend character of Bray Wyatt. If they make this situation real and address it correctly Lars Sullivan can go from zero to hero in 2020. Ignore the situation and Lars Sullivan’s career is done and over. Sometimes in life we all have to take our licks and eat humble pie. This is the time for Sullivan to take his licks, eat some humble pie, and not run away from this. This is the only option I see to fix the once bright career of Lars Sullivan. 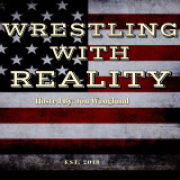 The State Of Professional Wrestling: Interview With Vince Russo

The State Of Professional Wrestling: Interview With Vince Russo

AFC or NFC, Who Wins It All?

Breaking: James Comey Appears to be Focus of Leak Investigation

Has the WWE’s Hell in a Cell Match Jumped the Shark?