Nate Burleson is well loved by Detroit Lions fan’s and this story will make you love him even more.

We all remember the Nate Burleson incident when he broke his hand trying to “save his pizza”… Nate joined the popular sports podcast Pardon My Take to talk about the entire day:

“I get to the hospital. At this point they’re taking my arm in this harness and they’re trying to reset it. The nurse who was doing it was a guy with a Green Bay Packers nurse cap on. I wouldn’t say he wasn’t trying to hurt me. But he def initely was enjoying the fact I was in pain even so much so he said “I’m so glad you’re not going to be playing this year.”

“Then he was like ‘We’ve got to pull blood to make sure you weren’t drinking.’ I told him that I was drinking earlier in the night but I haven’t had any drinks in hours. Then he said “yeah, we’ve still got to pull blood.”

Then Nate went on to say that the cop came in and said that they already did the test after they showed up to the accident. Then the Packer fan continued to try and get them to get him for a DUI. 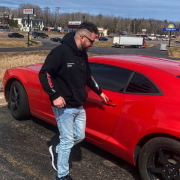 How to Break into the Sports Betting Business

Watch: Charles Barkley Smokes an Egg Off Of Shaq’s Head on Inside The NBA

Jose Canseco Slides Into Alex Cooper From Call Her Daddy’s DM’s – A Swing And A Miss! | @alexandracooper @JoseCanseco